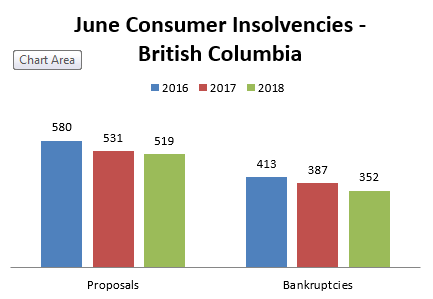 The Prairies saw an uptick in insolvency filings with Manitoba, Saskatchewan and Alberta increasing by 28.6%, 7.8%, and 16.4% respectively year-over-year. These monthly increases are significantly above how these provinces are trending on a rolling 12-month average. With oil prices generally on the rise this year, it is counter intuitive that insolvency filings in the Prairies would be increasing at the same time. One the other hand, Quebec, Ontario and BC had year-over-year decreases in insolvency filings, declining by 7.8%, 3.6%, and 5.1% respectively; these declines are more negative than these provinces’ rolling 12-month average.

Job numbers have also been volatile in the last few months, with July showing an increase of 54,100 jobs and August showing a decrease of 51,600 jobs nationally. The unemployment rate in Alberta and Saskatchewan is in the mid 6% range and in BC, Ontario and Quebec it is in the mid 5% range. Ironically, the best time to file a consumer proposal is when unemployment rates are low. Let’s consider the following factors:

Although most people have the best of intentions when it comes to paying back their creditors, they need to assess the feasibility and decide whether they are realistically capable of doing so.

Try our debt calculator to assess your different options for paying down your debts. If you’re unable to see an end and are feeling hopeless when it comes to getting a hold of your finances, it may be an appropriate time to file a consumer proposal with a Licensed Insolvency Trustee.

Get in touch with one of our Licensed Insolvency Trustees today for your free, no-obligation consultation to learn how you can get on the path to becoming debt free.

Source: Office of the Superintendent of Bankruptcy, Insolvency Statistics

Greg Best enjoys working with clients to create solutions for their financial needs.

Cynthia’s goal is to ensure that every client feels respected and understood and to instill hope that they can get their life back by giving them the fresh start they deserve.

Ask Us a Question